HomeAMEND Together Launch Forum
A- A A+

AMEND Together is a primary prevention initiative dedicated to ending violence against women and girls by engaging men and boys to be a part of the solution. Developed by YWCA Nashville and Middle Tennessee, AMEND Together seeks to challenge culture that supports violence, cultivate healthy masculinity, and change the future for women and girls.

“I believe the next generation is going to change this story,” says YWCA MV CEO Dianne Stancato, “and we’re going to do it by delivering this program.”

The kick-off forum welcomed AMEND Ambassadors, the YWCA MV education team, and keynote speaker Shan Foster, Vice President of External Affairs and AMEND Together at YWCA Nashville and Middle Tennessee. Foster graduated from Vanderbilt University in 2008 and has an extensive list of achievements, including being named SEC Men’s Basketball Player of the Year, All-SEC four years in a row, NCAA Division I All-American, and playing for the USA Team in the 2007 Pan-American games held in Rio De Janeiro, Brazil.

AMEND Ambassadors are prominent members of the Mohawk Valley community who encourage conversation surrounding the program and the positive influence they believe it will have for future generations. As of the launch, YWCA MV has four committed Ambassadors: Tony Karam of Utica College Young Scholars Liberty Partnerships Program, Oneida County Sheriff Rob Maciol, Mike Morrill of Total Solutions, and Joe Palumbo of Kristin’s Fund.

Of the AMEND Together program, Foster states that the Nashville area has seen a change in behavior in an estimated 75% of participating young boys.

“After seeing the success YWCA Nashville had with AMEND, we’re excited and proud to be the first outside agency to adopt and implement the program,” says YWCA MV Director of Community Education Tracy Stancato.

As the first early adopter of AMEND Together, YWCA MV will work closely with Foster and YWCA Nashville to create the same success Oneida and Herkimer counties. Future forums will further explore the roles of Ambassadors, localized issues faced by boys and young men in the community, and how to change the conversation surrounding masculinity. AMEND Together forums are sponsored by Kristin’s Fund.

“I’m happy to say YWCA Mohawk Valley is leading the way by bringing AMEND to your community,” says Foster. “The only question left is, will you join them?”

To learn more about the AMEND Together program and how to become an Ambassador, visit ywcamv.org/AMEND or email Tracy Stancato at tstancato@ywcamv.org. 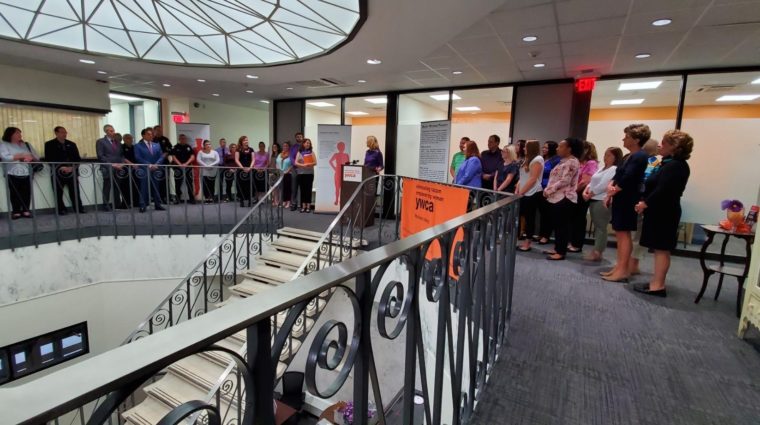